Murals: 1990-1999
“All One Love”–1999
Size/Medium: exterior 19’ x 92’.
Directed and designed by: Susan Cervantes
In collaboration with: homeless and residents.
Location: Rose Hotel, San Francisco
Funded by Mercy Charities Housing Corp.
"Culture of the Crossroads"–1998
Size: Entire exterior facade, 3’ x 17’ x 150’, exterior acrylic on cinder block
Directed and designed by: Susan Cervantes in collaboration with 16 muralists from Precita Eyes including children and youth.
Funded by: Rodrick Food Services.
Location:  McDonalds’ Restaurant, 24th and Mission Streets, San Francisco, CA
“Hope for the World Cure”–1998
Size: Entire exterior facade 17’-23’x 112’
Location: Bagdad Cafe, 16th and Market Sts., S.F. CA
Directed and designed by: Susan Cervantes
In collaboration with: Art from the Heart Heals, a group of artists affected with HIV/AIDS
Funded by: Cultural Equity, S.F. Arts Commission.
Description:
The mural can be read from right to left beginning with an elaborate explosion of colors. This torrent of color represents the chaos created by the disease and yet the beauty in the artist’s life and the beauty she contributes to it. “I feel the importance of doing what’s significant to me,” she states, “thereby adding great beauty to life itself. I love life and the colors add to it” (Hazel Betsey).

To the right is a single palm tree. With a price tag of $13.5 million for the F- Street Market renovation from Valencia to Castro, the single tree representing the whole project. In the face of the dire need for more money to fund AIDS research and support for patients, this image serves to question the City’s priorities (Andy Arzate).

To the left of these images is a large representation of the AIDS virus itself (Clif Cox) above a figure holding the world urging us to “Be there for the World Cure” (Andy Arzate). Teardrops fall from indicating the many tears that have been shed (José Escalante). The teardrops become larger and filled with medication until they ultimately splash into the cocktail glass of a bed-ridden patient below receiving an IV, in a potent symbol of the cocktail of medications taken daily by those infected (Jose Escalante and Clif Cox). Abstract representations of fluids weave in and out of the designs (John Micheal Stevinson). A moon and a star shine from above. (Mark Arseneau).

The tears at the top begin to diminish in size over a representation of the AIDS Quilt, in memory of the many who have lost their lives to this disease. The first square of the quilt, Marvin Feldman’s, is shown (Daniel Woods). Next to it is a memorial scene of one of the artist’ lover who died of AIDS, with a poem by the lover (Juan Carlos Oregon). The mural focuses here on memorial and recognition of the individual life. The community is healed when their voices are heard through ritualized celebrations of the lives of their loved ones and through the public mourning of their deaths. The next image, the tricycle with the milk carton, represents the healing that community awareness brings by evoking the Great Memorial Day Tricycle Race spearheaded by Charlotte Coleman owner of one of the first lesbian bars in the world” The Front” 1959 and “the Mint” 1969 until 1975, and a memorial to Harvey Milk who was surely one of the spectators (Andy Arzate).

A Figure who represents the frequent use of holistic methods of healing hovers above; the brilliant colors of the 7 chakras flow into the colors which constitute the rainbow flag (Daniel Woods). Just below and to the left, the “Alma Rota” Broken Spirit, a figure originally a sculpture by Manuel Martin, serves as a memorial to young people who have died of AIDS (Ruth Altman). The mural moves from dark to light from the depression of disease to the hope of life. Hope, in the figure of the volunteer representing all the volunteers that have stepped forward on their own, giving their love freely to those in need. The image serves as a special thank you to all the volunteers (Mark Arseneau). The flowers, cala lilies, catch the beauty of life and the peacefulness of death. The theme of healing is made explicit in the natural images of animals with people and trees together with the artists words inscribed in the tree’s branches. “Medicine heals my body, animals heal my heart and soul. “ here the connection to the earth and our animal natures is a source of joy and rejuvenation (Pali Boucher). Above the tree the AIDS candle is painted on a vent emerging from the building (Mark Arseneau). On one side of the vent “Castro” is painted in one direction of the on- coming traffic, resembling the marquis of the Castro Theatre (John Michael Stevenson). Behind the candle is another memorial quilt over which the pink triangle of Gay Pride is superimposed, and image of a butterfly-representing rebirth (Richard Purcell and John Michael Stevenson).

Following these images, two dancing figures, female and male, transparently blend together “ as one” reminding us that we are all both (Richard Purcell). The rainbow flag is muted as it hangs over the active- AIDS end of the wall, but it turns into a vibrant banner of color as it waves over the new life that springs up on this left side of the wall. The dancers and the flag carrier both remind us that the muted and the vibrant are part of the journey of Life (Richard Purcell and Robert Raeburn).


A tribute to Dykes on Bikes roars below and to the left of the dancing figures. The artist explains her contribution in the following passage. “ Being a member of the women’s motorcycle contingent, my name was pulled out of a hat of one hundred to be the pace rider in 1992! It was a thrill of a lifetime and I was so full of Gay Pride to lead dykes in bikes at the Gay Pride 92 Parade. People cheered as we rode down the road, it was as if everyone was cheering for me. I was so proud and full of pride about who I am- a lesbian with HIV and my negative lover on the back of my bike waving the leather flag” (Dorothy Bartolomucci). The final images are “Lollipop love trees, fields of love and mountains to climb.” They are images, which validate the struggle, the struggle, the recognition of the growth of love and hope and flight (Karen Tripp). The end figure is a genderless being with an enlarged heart for a head that is “seeing” love, receiving a seed of compassion in its right hand and offering a star of hope from the left hand while the heart blossoms into a gigantic and radiant flower that flames with passion while sprouting antennae of both male and female symbols of light (Tippett).


The realization for this mural is a “dream from the heart come true”. The artist, Clif Cox, states, “From the beginning of my HIV diagnosis to full blown AIDS, I have had a dream from my heart. The dream is like a full-length movie that you can enjoy fully, but feels sad when it ends. Hopefully, when I die or am cured of the AIDS virus, people will see some of the scenes from my AIDS existence in this history of the recorded. A mural can translate, in non- threatening ways, the reality of existence and our hopes. Art is healing, but also a spiritual experience. Please enjoy viewing this mural; you may see your dreams in Technicolor and enjoy your full hearts of concern and kindness.”
"All People, One Heart"–1997
Size: 4 community murals, two exterior walls: 56’x40’, one: 8’x 30’, and one: 16’x 35’
Directed by: Suaro Cervantes
In collaboration with over 20 Russian artists, children, and youth
Location: Moscow National Jewish School, Moscow, Russia
Funded by: Artslink
"Nurture”–1997
Directed by: Susan Cervantes
Location: Corner of 4th & Townsend, catty corner from the Main Cal Train Station in San Francisco.
"Precita Valley Vision"–​1996
Location: Precita Valley Community Center , 534 Precita Avenue, San Francisco Susan Cervantes collaborated with Mission Neighborhood Centers to create a new community mural on the façade of Precita Valley Community Center.
“Si Se Puede”–1995
Size: 38’x180’
Location: Exterior east wall, Cesar Cesar Chavez Elementary School, San Francisco.
​Funding: SF Mayors’ Office of Community Development, WESTAF, Zellerbach Family Fund.
"Keep Our Roots Alive"–​1993-95
Size: Diptych mural (two south walls, 40'x28' each, plus 9 panels, 2.5'x3.5' each).
Location: Cleveland School, San Francisco
​Muralists: Susan Kelk Cervantes, Juana Alicia, Jan Cook & Elba Rivera.
Funding: SF Mayor's Office of Community Development, LEF Foundation, Zellerbach Family Fund, Ronald McDonald’s Childrens Charities, and Nu Lambda Trust.
"MaestraPeace"–​1993-94
Location: The Women's Building, 3543 18th St #8, San Francisco
This spectacular mural is a culmination of a multi-cultural, multi-generation collaboration of seven women artists, and a colorful work of art that sings to our community.
​The mural was originally painted in 1994 by Juana Alicia, Miranda Bergman, Edythe Boone, Susan Kelk Cervantes, Meera Desai, Yvonne Littleton and Irene Perez, and others 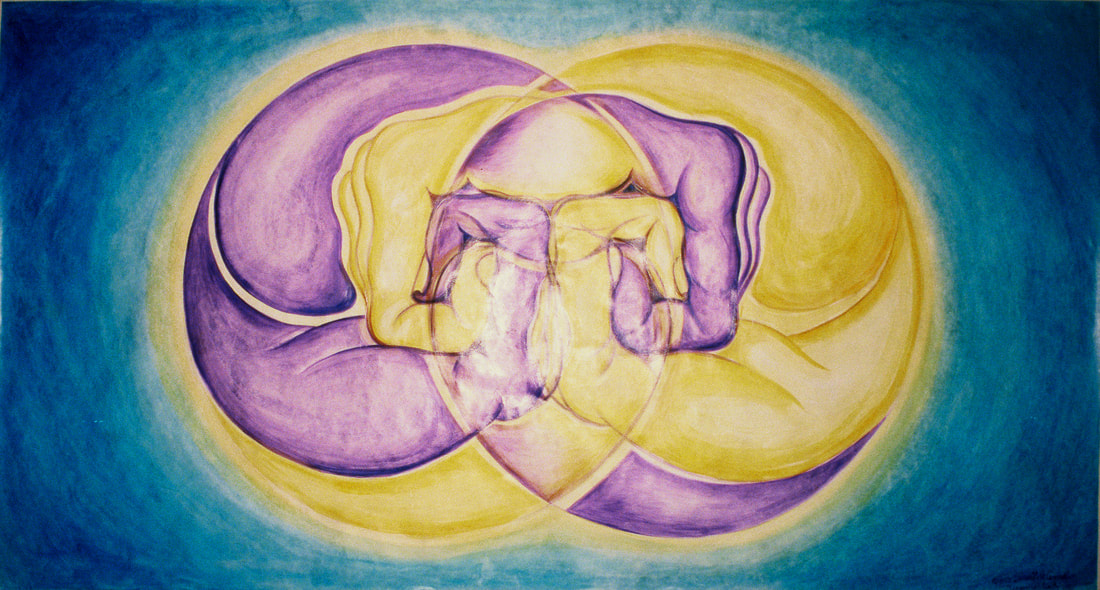 The San Francisco Historic Preservation Committee calls it an "awe‐inspiring" work of folk art that "serves as an extraordinary, unparalleled visual documentation of national and San‐Francisco‐specific African American history."

The "Great Cloud of Witnesses" is a mural unlike any you've ever seen. Looking for a way to inspire community youth,Reverend G. pasted a single newspaper clipping of his hero, Muhammad Ali, to the wall of the church gymnasium in 1980. Over the past 37 years, the collage has expanded to cover, from top to bottom, the entire gym, fellowship hall, stairways, hallways, bathrooms, basement, and meeting rooms -- basically, everywhere but the sanctuary.  The collage‐mural consists of newspaper and magazine clips, photos, flyers, posters, prints, poetry, painted murals, and a dizzying array of objects that celebrate heroes and history.
Precita Eyes muralists Suaro Cervantes and Ernesto Paulspent several weeks recently working on "the cloud," cleaning, sealing, and resisting the temptation to read the wall-to-wall scrapbook as they were working on it.

Ringing the top of the gymnasium wall is a sunset-colored fringe with the portraits of 10 civil rights leaders. This mural was created by an earlier Precita Eyes crew — Susan Cervantes, Selma Brown, Ronnie Goodman, Marta Ayala,and Patricia Rose. Suaro Cervantes remembers accompanying his mother Susan to the church, back in 1992.

The monumental collage-mural was granted SF historical landmark status last November. But it is not open to public yet, says Rev. G, "unless you want to stop by during church services, when you're more than welcome to attend."
"The Five Sacred Colors of Corn"–1991
Size: Exterior west wall (15'x55').
Location: Balmy Alley, San Francisco.
Funded by: Grants for the Arts, Hotel Tax Fund.
Directed and designed by: Susan Cervantes
in collaboration with: Mia Gonzalez. 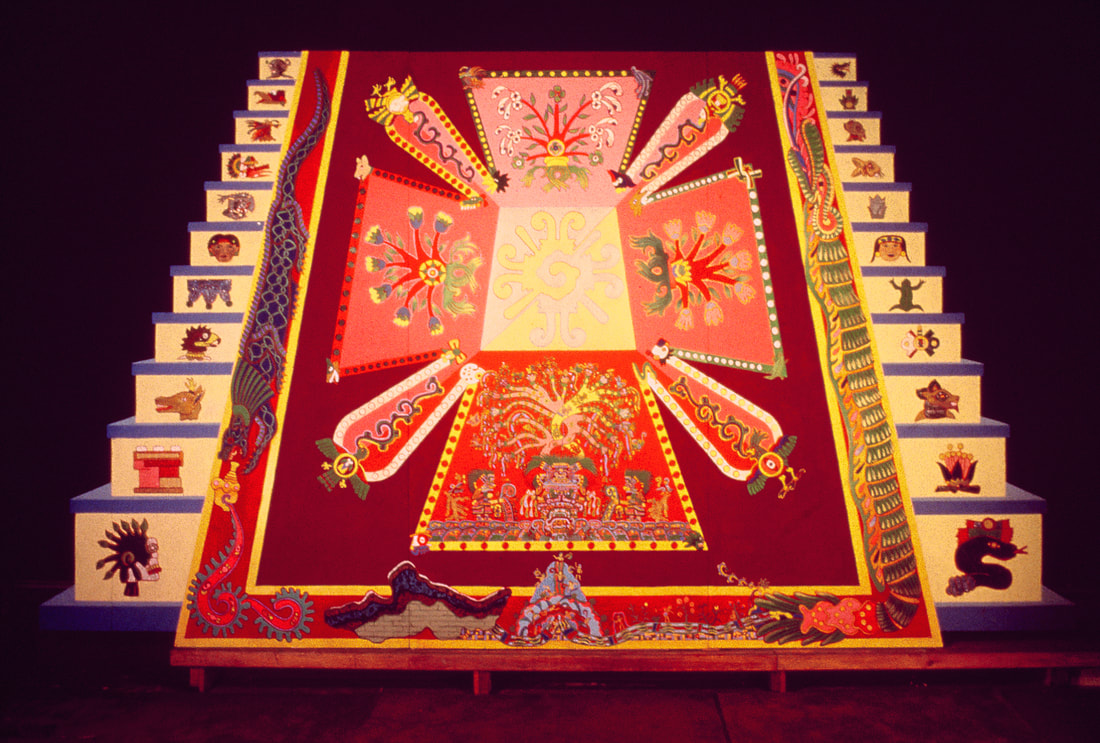